Spatial and seasonal trends in Chlorophyll a

The concentration of chlorophyll a, a measure of phytoplankton biomass has seen an overall decline by 8% in Australian waters over the past 17 years. Despite this general marked decrease, large parts of the ocean south and southeast of Australia and the coastal zone along the east coast of Australia have seen significant increases in chlorophyll a concentration. Declines in chlorophyll a close to shore along the North West shelf and throughout the Great Australian Bight may significantly impact these coastal ecosystems and the fisheries they support.

Spatial and seasonal trends in Chlorophyll a

Chlorophyll a is a pigment present in all photosynthetic phytoplankton species. The amount of chlorophyll a in water is internationally recognized as a simple but worthwhile measure of phytoplankton biomass. Chlorophyll enables phytoplankton to grow by capturing energy from the sun, thus earning phytoplankton the name “grass of the sea”. Without phytoplankton there would be almost no other life in the ocean – they provide oxygen, food for higher trophic levels, are important in carbon sequestration as they sink into the deep ocean and, therefore, are of great ecological significance (Sournia, 1978).

Chlorophyll a can be monitored relatively easily, but the use of satellites to measure chlorophyll a has revolutionized our ability to observe the spatial and temporal dynamics, especially large scales. These dynamics include seasonal patterns of phytoplankton abundance, climate cycles and any longer-term changes. Trends in chlorophyll a tend to reflect changes in the ocean’s physical and chemical dynamics as temperature plus light and nutrient availability are the primary determinants of phytoplankton growth. Temperature, light and nutrient concentrations have a range of natural cycles that drive most of the temporal variation in phytoplankton. This means that any longer-term climate-driven trends can be difficult to detect without a sufficiently long time series of measurements to apportion phytoplankton variation to the right driver.

Phytoplankton pigments are a major source of colour in the world’s oceans and satellite technology has made it possible to obtain global estimates of this colour many times a year. The temporal and spatial sampling achieved by satellites produces a marvellous global estimate of phytoplankton biomass using well established empirical relationships. Research continues to reduce the small errors associated with variation in absorption and backscattering properties of phytoplankton and effects of coloured-dissolved organic matter and minerals (Dierssen, 2010).

Here we have used sixteen years of satellite data (2003-2018) from the MODerate resolution Imaging Spectroradiometer (Aqua-MODIS) sensor that estimates the near-surface concentration of chlorophyll a using an empirical relationship derived from in situ measurements of chlorophyll a and blue-to-green band ratios of in situ remote sensing reflectances. Full details can be found at https://modis.gsfc.nasa.gov/data/dataprod/chlor_a.php.

Satellite data were processed using the SeaDAS software with the OCI chlorophyll algorithm (Hu, Lee, & Franz, 2012). Data were analysed to give monthly composite maps of the chlorophyll a concentration. Linear temporal trends were extracted across a range of spatial scales from 4 km2 to the Australian region (50°S to equator, 100°E to 170°E), including analysis of the de-trended time series (the time series from which the mean seasonal cycle was removed).

Chlorophyll a within the Australian region

The mean chlorophyll a concentration in surface waters across the Australian region between the beginning of 2003 and the end of 2018 was 0.25 mg. m-3 (Figure 1a). This is a low concentration typical of healthy tropical and subtropical oceanic waters. Areas of markedly higher chlorophyll a include the coastal zone around Australia, seas between Australia and its northern neighbours, and waters between Tasmania and New Zealand.

The mean monthly chlorophyll a concentration varied seasonally and inter-annually (Figure 1b). There was, however, a significant (P<0.006) negative trend across the entire region over the period from 2003-2019 (Figure 1b), with the Chlorophyll a concentration declining ~8%. By contrast, there were large parts of the ocean south and southeast of Australia, and in the coastal zone along the eastern seaboard plus smaller patches throughout the shallow seas north of Australia there were significant gains in Chlorophyll a. (Figure 1c). Within the region the most significant (Figure S1) downward trends in Chlorophyll a were found between 120 and 130°E near 40°S, near the centre of the Gulf of Carpentaria and nearshore in two regions; parts of the North West Shelf and throughout much of the Great Australian Bight.

Chlorophyll a within the Australian EEZ

Within Australia’s continental EEZ the mean chlorophyll a concentration was 0.26 mg m-3 (Figure 2a). Chlorophyll a tended to be low in the tropical and subtropical oceanic regions; greater in the coastal zone, the shallow seas between Australia and its northern neighbours and around Tasmania.

Chlorophyll a within the Australian bioregions

State and trends in chlorophyll a were assessed for each of the six bioregions (Figure 5). Mean values for each bioregion are all different (Table 1) and so are the trends (Table 2). There were no statistically significant positive trends in any bioregion. The Coral Sea, Temperate East and Northwest Bioregions all showed significant declines from 2002-2019.

The phytoplankton biomass around Australia is relatively low; a situation typical of most tropical and subtropical waters. Unlike most continents, Australia does not have large-scale upwelling along its west coast as it is supressed by the southward-flowing Leeuwin Current.

The North, Northwest, Southwest and Coral Sea all experienced greatest phytoplankton biomass in winter. By contrast, the Temperate East and Southeast regions show classic spring blooms during September or October. These periods of high phytoplankton biomass provide periods of peak food availability for zooplankton and are often the most important period for larval fish recruitment. The capacity for our marine ecosystems to sustain our existing biodiversity is dependent upon both the amount of phytoplankton present and the timing of the greatest biomass.

Although the spatial patterns of change in Chlorophyll a are patchy from 2002-2019, the rate of change averaged over the region, the continental EEZ, and within 3 of the 6 bioregions was significantly negative. If the overall rate of decline is sustained at 0.5% per year, it will eventually cause a dramatic impact on the region’s marine ecology and is very likely to cause a reduction in many regional fish stocks. Declines in Chlorophyll a close to shore along the North West Shelf and throughout much of the Great Australian Bight are of considerable concern given the potential impacts on our coastal ecosystems. A longer time series and more in-situ monitoring should reveal whether this decline is caused by a climate cycle or is likely to persist if the planet continues to warm. 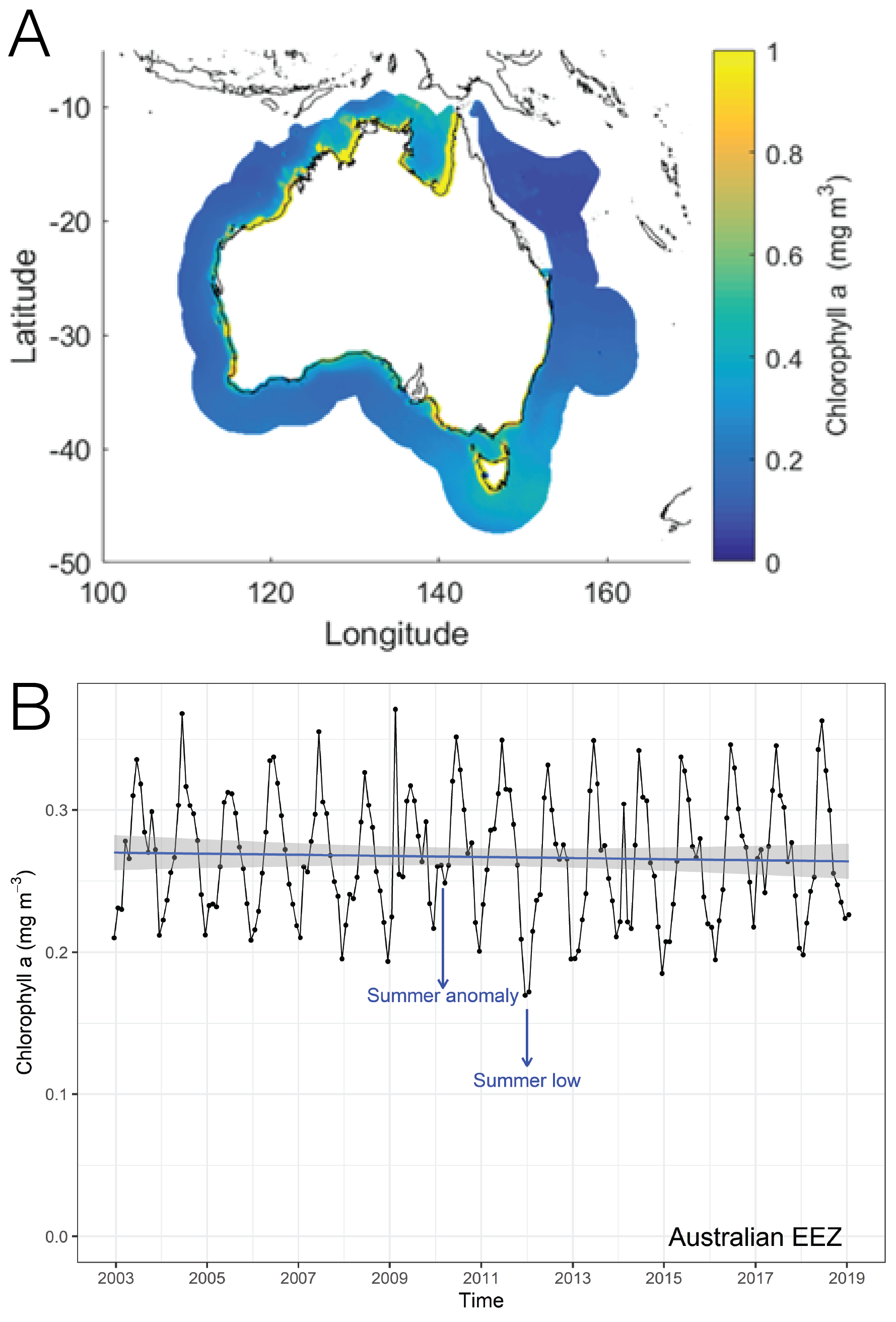 a) The mean Chlorophyll a (mg. m-3) within the Australian Economic Exclusion Zone (EEZ) from 2003-2019 (the EEZ extends 200 nautical miles from the territorial sea baseline). b) mean monthly EEZ chlorophyll a fitted with a linear regression showing the long-term trend. Some anomalous summer months are circled. They demonstrate the interannual variability associated with climate cycles such as ENSO. 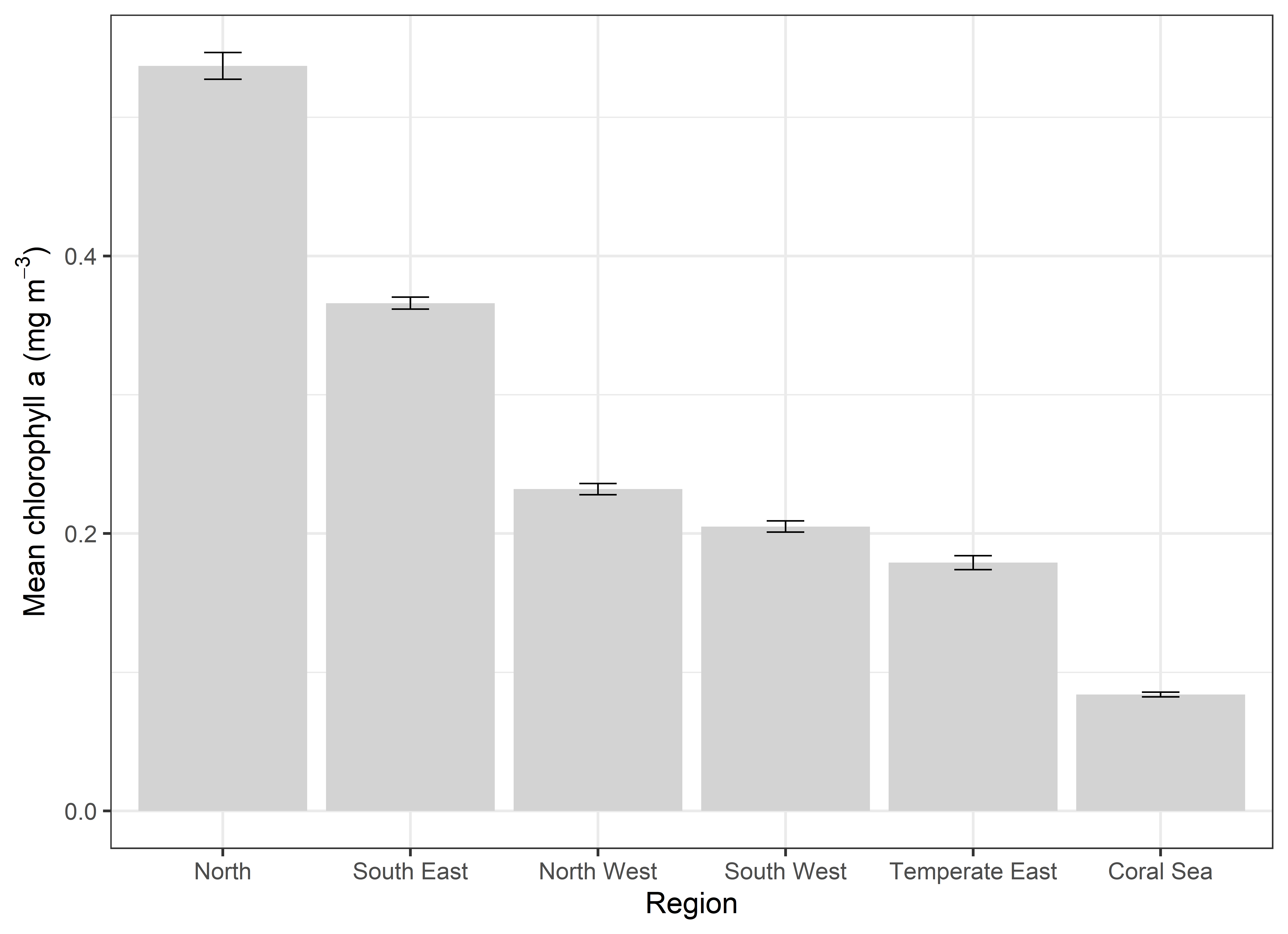 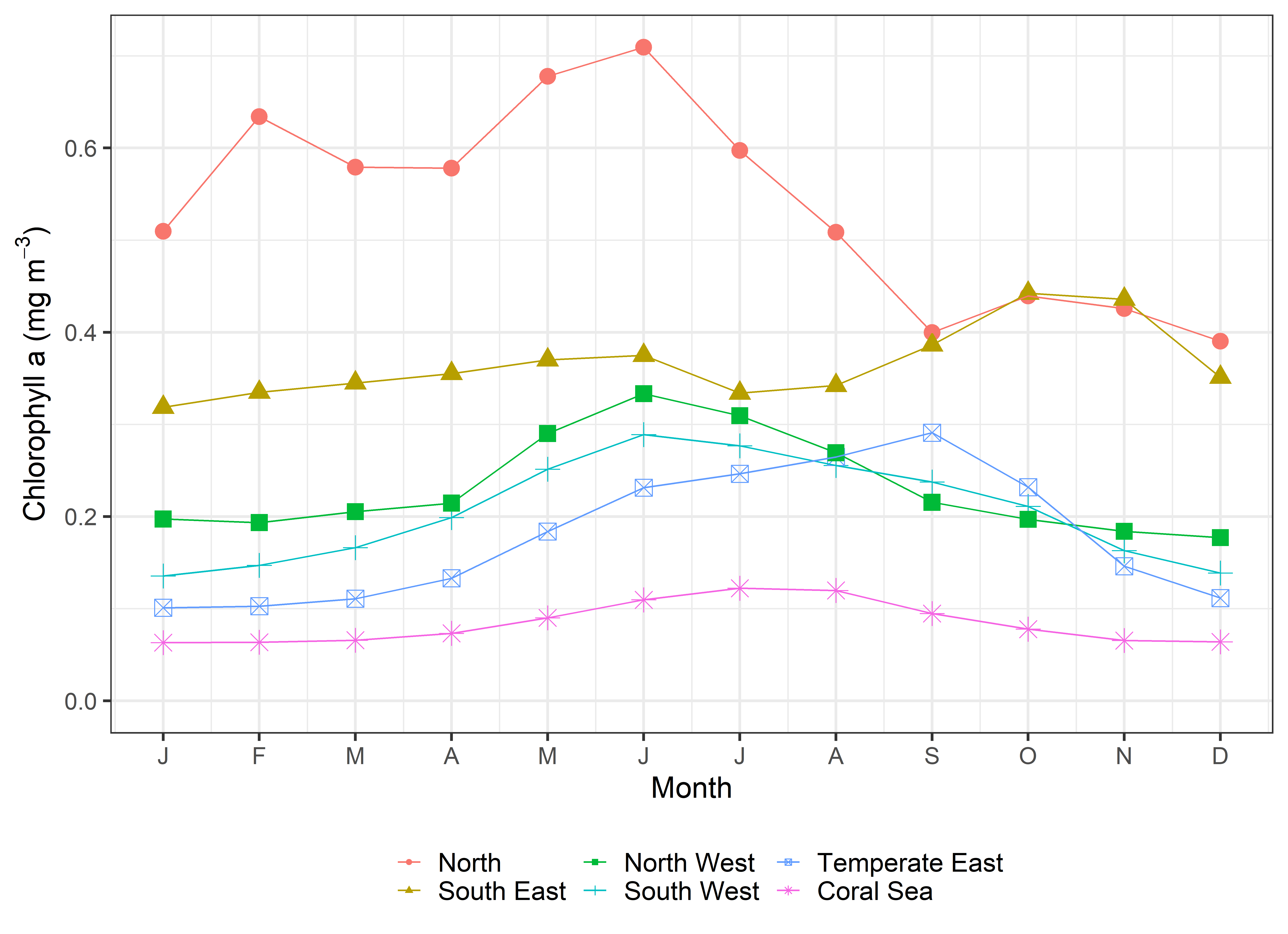 Monthly mean concentrations of Chlorophyll a (mg. m-3) within each of Australia’s six bioregions from 2003 -2019.

Mean monthly chlorophyll a concentrations (mg. m-3) for the six Australian bioregions from 2003 to 2019 including a linear regression showing the trend for each bioregion. 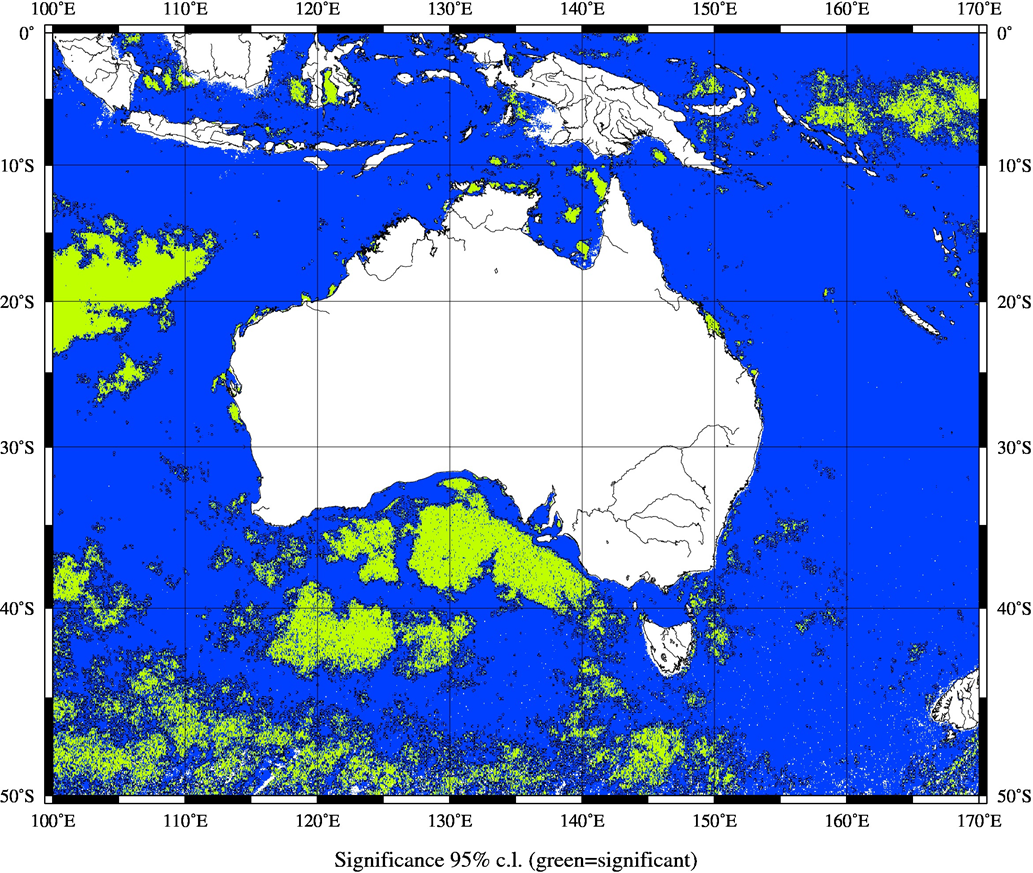 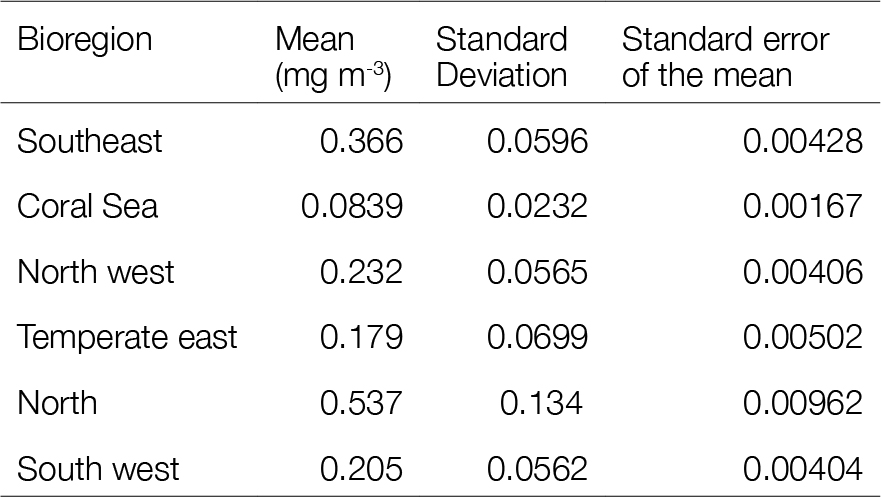 Assessment of linear trends for seasonally corrected (the average monthly mean is subtracted from each monthly value) chlorophyll a concentrations in 6 Australian bioregions over the period 2003 to 2019. 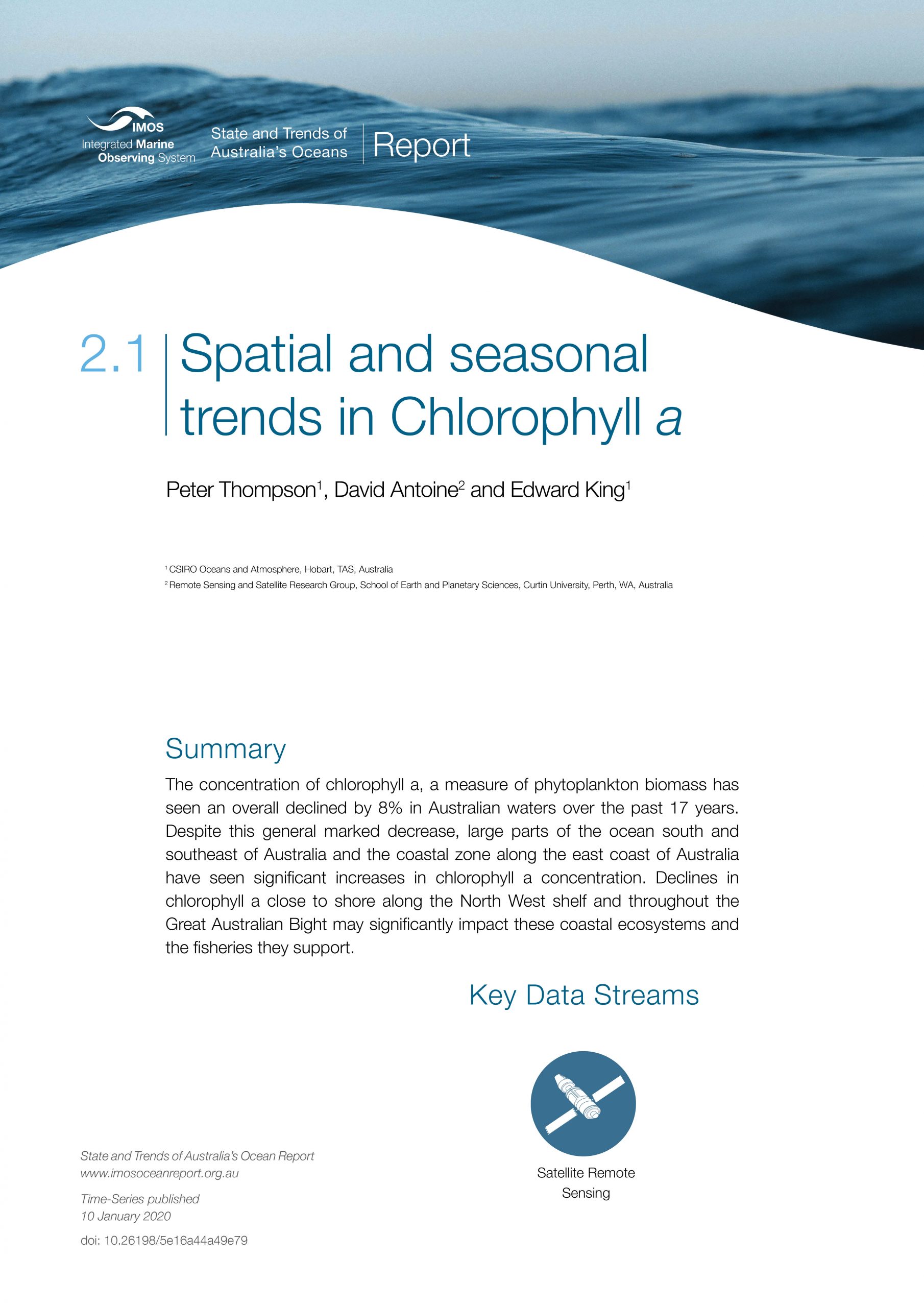 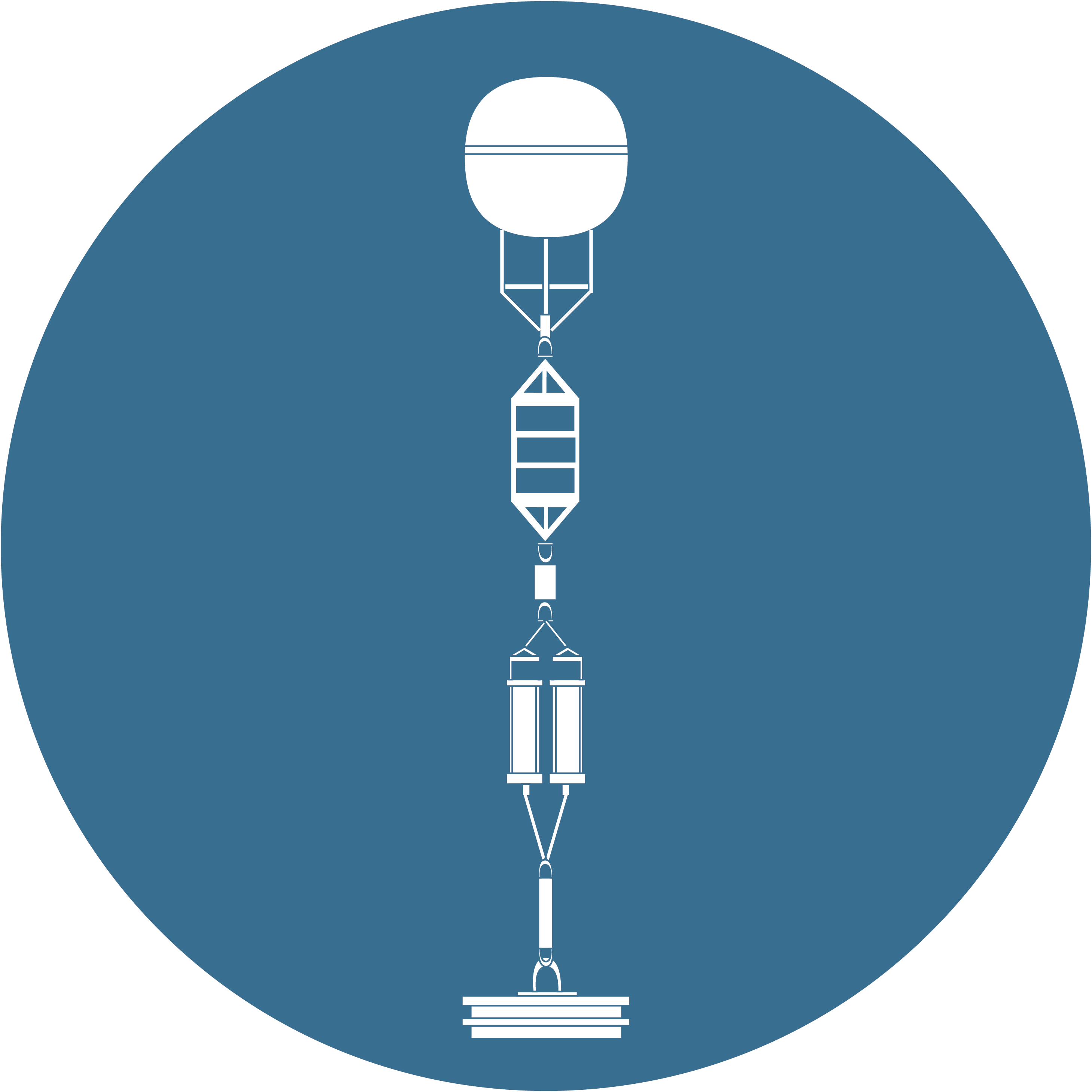